Grow your business without growing your waistline.

The concept is simple.

The idea came about when I first launched WISECHAPTER3 and was networking A LOT over meals and drinks. I begin to notice, that while I was growing my business, my waistline was growing as well. Whala! Netwalking was born. Instead of meeting people for drinks or food, I started meeting them for walks and talks. As I tested the concept out, I realized it had legs (no pun intended) and learned that walking in the great outdoors was regularly practiced by such successful and famous leaders such as Apple’s Steve Job’s, Facebook’s Mark Zuckerberg and Twitter’s Jack Dorsey. 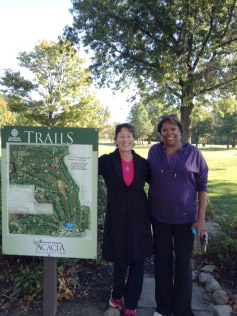 Karen Malone Wright (right),
founder of TheNotMom.com
on a Netwalk with Tammy.

Meet new people, share ideas, and engage in smart conversation as we walk and talk every Wednesday. Cuyahoga County-based locations rotate from east, west and south side, urban – downtown, and Ohio City. Walks range from 40 minutes to an hour. The Netwalking season officially kicks off on Wednesday, May 13.

“I loved our netwalk today. What fun! The time flew by so quickly. We covered a lot of ground (literally and figuratively) and shared important information. I can’t wait until our next one.” — Christine Zust, founder of Zust & Company