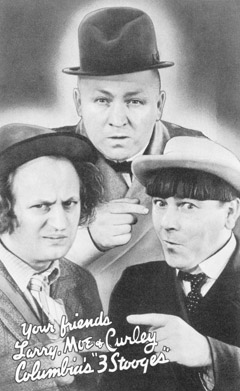 Did you know that people naturally tend to think and act in multiples of three? If you write down two goals – you’ll most likely feel like you’re missing something. If there were only two little pigs – we wouldn’t know the importance of hard work. And any fan of The Stooges knows the magic happens because it’s a party of three.

So how can you use the Power of Three in sales and marketing?

In June 2013, two marketing and behavioral science professors Kurt A. Carlson of Georgetown University McDonough School of Business and Suzanne B. Shu of the University of California, Los Angeles published a paper entitled When Three Charms But Four Alarms: Identifying the Optimal Number of Claims in Persuasion Settings.

The 50-page paper answered two questions “Is there a point at which an extra claim undermines the persuasiveness of a message? And if so, where is this threshold after which additional positive claims undermine the persuasiveness of the entire message?” Their research concluded: ““in settings where consumers know that the message source has a persuasion motive, the optimal number of positive claims is three. More claims are better until the fourth claim, at which time consumers’ persuasion knowledge causes them to see all the claims with skepticism.”

As sales professionals and marketers we often forget about the simplicity of three and operate under the “more is better” theme. This tendency to provide all the compelling reasons why your product or service is the best can have a dangerous impact according to Carlson and Sho’s report. The magic number is 3. After that, skepticism sinks in causing the consumer to disregard all the claims. By linking your company’s services, stories or solutions to groups of three, you’ll prove to be a more effective and engaging communicator.

Here are my three steps to finding your company’s three:

Step 1: Schedule time to get it right.

Who will ultimately sign off on your top three messages? Get this team together and start the process. This is not a one and done meeting. I recommend weekly or biweekly meetings with the leadership team until everyone is in agreement.

Step 2: Map out all of your compelling success stories – then edit them down.

How many stories are you using today? What are they? Now prioritize: which three stories best illustrate who you are and how you help your clearly defined audience.

Make sure your top three messages/stories funnel down to everyone within your organization: you never know when an opportunity will arise to share your story.

Gather, edit, share: it really is as simple as 1, 2, 3. As a true believer in the power of the number three, I included it in my company name. What about you? How do you use the energy and force of three to get across your message?