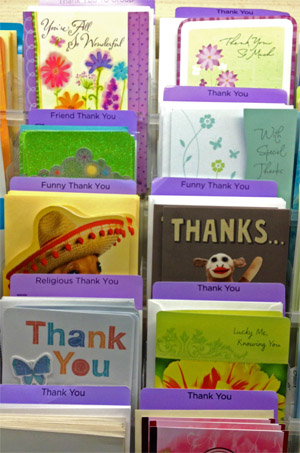 Who would have thought saying two simple words could give you a competitive edge in business? “Thank you” can separate you from the crowd.

While it sounds ridiculously basic … expressing genuine gratitude is the easiest and least expensive way to get noticed. Another way to be remembered? Do not say thank you. Ask anybody, and I bet you they can easily recall the name of a person who should have given thanks but didn’t and the name of a person who went above and behind with a thoughtful gesture of gratitude.

Advance or jump-start your career

Speaker and non-profit leadership consultant, Joan Garry says the most important lesson learned from George H. W. Bush was the power of a “good old-fashion thank-you note”. Bush, credits his strong habit of sending “thank-you” notes for advancing his career.

Several studies on the impact of gratitude expressions conclude that organizations, leaders and individuals lose a lot of relatively free opportunities to motivate people when they do not express gratitude.

Below is a synopsis of some of the results from a 2010 study by Adam Grant of Wharton and Francesca Gino from Harvard:

A field study looked at 41 university fundraisers who earned fixed salaries. The director visited half of them, telling them, “I am very grateful for your hard work. We sincerely appreciate your contributions to the university.” The second group received no such expressions of gratitude.

Download the full report, A Little Thanks Goes a Long Way: Explaining Why Gratitude Expressions Motivate Prosocial Behavior, as a .pdf file.

Much has been said about the power of thank you … including this Ted Talks video, Laura Trice: The power of saying thank you, for those who need more convincing.

So, let me kick start this blog in a positive way. Thank you for reading this blog. Your time is much appreciated!